Big-O notation is used to estimate time or space complexities of algorithms according to their input size. Big-O notation usually only provides an upper bound on the growth rate of the function, so people can expect the guaranteed performance in the worst case. Due to the reason, Big-O is more widely used by developers compared to Big-Theta and Big-Omega. 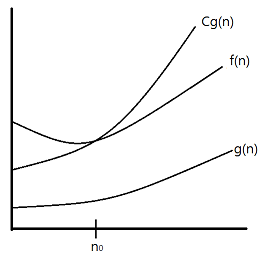 Let’s see examples for better understanding. There are two algorithms written in C for sum from 1 to n. (The comment of each line means the operation number.)

There exists and such that for all (e.g. )
Therefore,

There exists such that (e.g. )
That means,

In real situations, we may face more complicated expressions than the examples above. Let’s suppose that the complexity function is , and we need to simplify this expression using Big-O notation. To say the conclusion first, among the three terms , , and , the one with the highest growth rate will be used as follows: .

, where and are real numbers.


Therefore, where and Consequently,

Going back to , we can use the same approach in order to make Big-O notation for .

Many algorithms consist of two or more sub-procedures. We can derive their proper Big-O notations using the sub-procedure’s Big-O.

Proof:
By the definition of Big-O, there exists such that for all and for all .
Also, let , , and .